The Weight of Empathy

I was eight when I walked through a high-end department store and saw a fur coat.
I fell to my knees in tears and cried. To my mother's dismay I bawled, asking, "Why? Why would you kill an animal?"
It was the first time the world appeared to be cruel. The first time my gaze took me beyond me and my innocence. It didn't take long to realize I wasn't cut out to be a journalist, there were too many sides to one story, too much humanity and too many errors for me to understand. 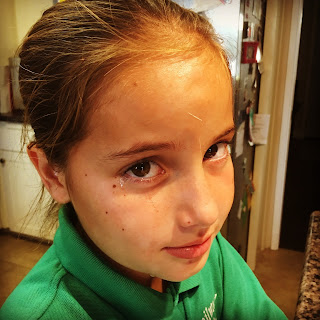 Yesterday, Laura googled Donald Trump, followed by Hillary Clinton and every other issue our country has spent the last two years arguing.

Laura broke down in tears, her heart town between empathy and despair. She watched Trump blast her faith and her heritage, then watched Clinton speak about abortion.

She teetered from one controversy to the next. For the first time, she realized there wasn't a perfect answer or a perfect hero. Her world shifted, the boundaries now wavy. Her ten-year-old world was no longer black and white. It was her first taste of gray.

Laura is going to stumble, she's going to fall while she finds her own way, her own beliefs. Wherever she goes and whatever she chooses I hope she never loses her empathetic heart.

Oh, Clarissa. So sorry she had to experience this disillusionment/reality check at such a young age. Bless her sweet, smart, empathetic heart. She is the very kind of person the world needs. xoA <3