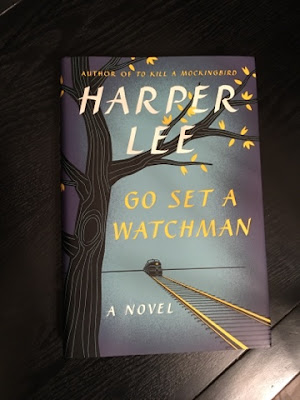 I read the early reviews and knew the mysteries surrounding Harper Lee’s second book—the prequel or sequel depending on the conspiracy theory. It took ten months of gathering courage before I'd crack the spine.

Dismissing the controversy and wading through a rough prose, I embraced one (and only one) aspect of the book. Atticus falls. The man I admired from primary school fell from his throne. Scout, true to her quick tongue and ill-confirming mind, dies inside after witnessing her father’s involvement in a segregationist council. Her disillusion breaks her soul.

I clung to her emotions—and remembered my own slow death. And birth.

Mockingbird: A Portrait of Harper Lee was published nearly a decade before Lee’s sophomore novel. Charles J. Shields painted Lee and her family with candid humanity, describing A.C. Lee (the inspiration for Atticus) as a good man, but “not a saint.”

I was in elementary school and my birthday fell on Martin Luther King, Jr Day. He was my first pick for researching a historical figure. He was the catalyst, the spark that ignited a nation into action. I was two weeks into the research when I found evidence of his personal life. My stomach flipped, triggering me to find more information—he was a good man, I just needed to debunk the betrayal of his family. The more I read, the sicker I became.

So many heroes demolished with the power of knowledge. These figures changed the world, they set standards to aspire to. Much like Scout, I felt the floor crumble beneath my feet.
It’s only when Scout’s uncle clarifies her pain, the severing of her conscious from her father, Atticus. The unattainable vision of her father’s perfection disintegrated.

The men I revered were heroes—but they were also men. They stumbled, they fell. After hours of dissecting Go Set a Watchman, I realized Atticus was again a man to respect. Not for his believes but for his patience. Scout is called a bigot—she shouts her own reason as gospel instead of pausing long enough to listen. I agree with Scout’s fervor for equality but not her disregard for others’ beliefs. I destroyed the lives of great men because of my beliefs instead of listening to their story.

I offend. I hurt. But there’s some worth in me, there’s some influence for good surrounding me. We’re human—even heroes.

Thank you, Nelle Harper Lee, for teaching me once more.

A Group for You

Writers of Kern is the local chapter of California Writers Club. We’re snuggled in between San Francisco and Los Angeles, right in the belly of the San Joaquin Valley. The valley’s hot summers and foggy winters feed our creativity, allowing us to host the largest number of face-to-face critique groups in the state (arguably the nation). From Christian to erotica and memoir to fantasy, we have a critique group for everyone. Including you.

For years I bounced between online critique forums (Scribophile was my favorite) but all of them lacked one crucial element—conversation. Thankfully, Writers of Kern has filled the void.

Our members travel (and some via Facetime/Skype) to participate in their critique groups. Each group is made up of 3-6 writers who read each author’s submission prior to the meeting. Candid feedback is applied liberally, and repeated a few weeks later.

The groups are directed by a vetted critique leader and a standard critique form—both of which are evaluated every six months at a biannual critique leader meeting. We read, we cry and we encourage through the success and rejection of every author.

Our ambitious critique groups have turned literary heads (CWC for one). Finding a group of like-minded writers to help hone your craft is but a dream to most aspiring authors. Writers of Kern is no longer cheering our writers from the sidelines, we’re grabbing their hands and running the marathon with them.

Take the plunge, join our cause. Apply here for membership and here for our complimentary critique groups.