The Reunion of Fall 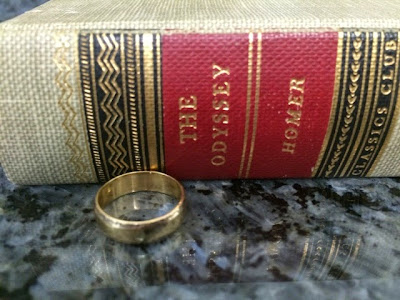 When trees start shedding their leaves and noses become rosy, I'll slip a brittle gold band on my finger and cradle The Odyssey. Both are treasures from two of the most influential men I knew.

As a child, I was precocious with a dash of inquisitive--or just plain annoying. It takes great skill to trip over flat surfaces (while reading a book) or memorize the entire Greek alphabet and write letters to yourself in your secret Greek code (true story) but conversing with my peers? Not so much. Awkward and nerdy aren't exactly the most appealing attributes of elementary aged children. I can't imagine why.

But not to Uncle Ray. Even now, a few painful years later typing his name makes me pause.

My insatiable fascination (borderline obsession) of the ancient Greek culture won a smile and a book. From his beloved library he gave me The Odyssey and then later, the Iliad. He encouraged the art of strategy by teaching me chess. To this day, it's one of only three board games I'll play.

Instead of being odd, I was deliciously different. He'd read my poorly written tomes and chuckle at my ambitious goals. His unsteady handwritten letters still found their way to my door while I was in college. No matter how wrong my point of view was or how ludicrous an idea, he would listen.

I miss my uncle. I miss my friend.

Never did I need him more than last winter, a rough patch I'm still trying to forget. His greatest talent was his ability to pluck a silver lining from my tense perspective.

A few years before the loss of my uncle, I was introduced to a crowd of strangers by my soon-to-be-husband. I was fighting the instinct to hide when a bespectacled Grandpa Hulse grinned at me from across the living room. He patted the couch cushion next to me and before I could sit he said, "there's too many damn people here."

We snickered a moment before he recited a poem, The Man from Snowy River (the inspiration behind the movie). It was the movie I first watched at Uncle Ray's house. The same movie Damon played when he was laid off and the stress halted the labor of our second child. After a few scenes, my nerves calmed and a beautiful baby came into the world.

Grandpa Hulse was known for his blunt attitude and scathing words--but not to me. He was tender and mischievous. We conspired to slip cow tongue into the enchiladas at the weekly family dinner. He'd wink at me after asking about my animal science research and encourage me for the hundredth time to apply for a job on Antelope Island (a completely impracticable position). When the crowd was too large for us to handle, we'd disappear downstairs where he would encourage me to write. Not just the poems he'd pen for the family but to author the stories he never could.

Before he died, I was given the gold band he first gave Grandma Hulse. The metal was brittle and the edges worn by the battle of mortality. When I slipped it onto my finger he chuckled, saying, "That's the second woman to take a ring from me."

I miss my grandpa. I miss my co-conspirator, my friend.

When I hold these treasures I feel the tenderness of acceptance and love. And the hope I will return the ring and the book to their masters--a reunion worth waiting for.