The Lion and The Lamb

Please Note: This is a deeply personal post, and has been written, erased and rewritten countless times. The amount of courage I'm trying to gather in publicly speaking on this topic cannot be underlined enough. I realize the nature of blogs and the unending, far reaching consequences of emotionally stripping yourself to the masses. I wrote this post for a version of me - I could have used this letter. I'm hoping this helps at least one person out there in the untamed internet landscape.

We each know of a friend, a family member...but rarely (if at all) do people speak about their own fears, failures and struggles. Only after we've conquered our personal Mt. Everests do we lend our advice. But this isn't about conquering. This is about living. It's about being in the trenches - in the most literal and figurative sense. I'm caked in mud and covering my ears from the onslaught of guns - and I'm here. We're in this battle together.

The Lion and The Lamb

My package had arrived (finally) a culture miniature statue with a lamb delicately carved next to a powerful lion. 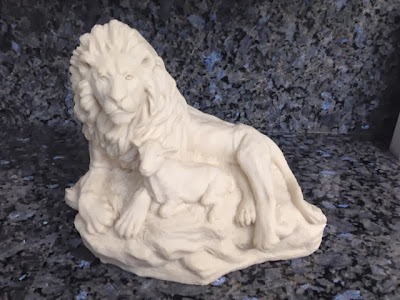 Alone and overwhelmed, I traced the lion's mane and wept. I cried for every hope, fear and failure this statue represented.
Because life used to be different.
A shadow once held me captive. I had lived with it since I was nine years old. It interrupted my sleep one night, and never left. The shadow lived inside me and stole my voice. It clouded my mind and sucked the very joy from my soul. Twelve years ago, as a college student, I was suffocating in the thoughts of my perceived failure.
I was imploding from within - and no one knew. The shadow was my secret. It was kept under the bed, in the closet and in the back of my heart where no one would reach.
And then one night, I curled under my covers and prayed for the pain to be gone. The hurt was a gaping hole in my chest. I had sought refuge in church service, scripture study, pleading prayer and even prescription medication. But the hole never shrank. Instead it grew as I redoubled my efforts to conceal the shadow and its power.
I watched every minute pass that night in slow, agonizing seconds. I wished the hurt would stop. Even if it included my life. In the pit of my isolation, I wondered if the sun would rise. Would hope become a forgotten companion? Morning came - hope did not.

The exhaustion from hiding the shadow had taken its toll on my personality and relationships. There was only one person left at my side - with the talent of a sharp tongue and even more lethal pen, I had chased away family and friends. Then promptly built a fortress so deep and so high that only a shadow could thrive in the cold, sunless heart.

But one person didn't give up. With a tear in his eye and an arm around my shoulder, my childhood friend guided me that morning to a counselor. As I entered the room, I noticed a painting. It was a lamb nestled next to a lion. It promised peace between the rage of a powerful predator and the tender soul of the prey. That day I received a promise, that one day the lion would rest with the lamb.

I healed enough to graduate, marry and devote myself to three beautiful girls. But my lion has not made peace with the lamb.

Depression is not just a mental illness. It is a physical one. It depletes the body and murders its host. It's a cancer of the soul imbedded in my genes. Even with strict adherence to antidepressants (exercise, diet, social and intellectual stimulation...) and avoidance of triggers (isolation, silence, too much social stimulation, lack of exercise...) the shadow can still threaten my joy.

I am in the trenches. My hands are sticky with the shadow's blood. I have fought for every inch, every gain against the enemy - and damn it, I'm still here. Though there are seemingly endless nights, I am still here. Life is good. But sometimes my perspective is not.
There are moments of peace. There are moments of pain. But the shadow has not won. As my husband says with a chuckle, I'm too damn stubborn to stay down for long.

Depression is so very real. So is the stigma attached to the disease. I am convinced of my weakness and failure when the shadow is strong. I cannot see my own worth, regardless of my religious conviction. People don't talk about this. Most people assume the illness is for the weak-willed or the effect of a guilty conscience. But those of us who struggle are in the company of giants. George Albert Smith, a pillar of spiritual leadership suffered so desperately from the tyranny of depression that he begged his maker to take him home. The shadow bound him to his bed for three years - and yet he was a leader of a church and would continue to do so for several more years. He was not weak. And neither am I. Winston Churchill attacked his shadow during, and after, World War II. Charles Dickens, William Faulkner, Vincent van Gogh, Ernest Hemingway, Abraham Lincoln, Michelangelo, Isaac Newton...

I will stumble. I will fall. And I will get back up. Again and again.
Can I do it alone - absolutely not.
I have a team of devoted soldiers that are crazy enough to stay at my side and pull me from those trenches long enough to see the sun shining through the clouds. A husband of herculean strength along with loving and loyal parents, a counselor and a slew of tender friends make even the darkest shadow shrink back in fear.
Do I laugh - why, yes. Yes, I do.
My natural temperament is not morose. Life is something I quite enjoy feasting upon. Joy is something I find in gardening, running, writing, reading, my children, learning...
Life is profoundly good. It is oh so hard at times. But life is good. And one day, my lion will slumber lazily next to the lamb. Until then, I am here. I am fighting. And if you're battling the same unseen enemy listen to these four words. Do. Not. Give. Up.
You are worth this war.
You are not weak.
Hold my hand, let's do this.

At the heart of the lie is the belief that no one understands, that there's no one able to get what's really going on. The whole thing is not logical. Why, when I have everything people dream of, do I feel that Hemingway's fate is a matter of when, not if, for me?

Thanks for posting this. I don't have the counselor on my "team", just 3 people who do what they can and yet resent that they are not enough. As I said, it's not logical.

I guess every moment we're alive is a victory.

This is true! We are victorious with every breath. I will say that I do have a counselor right now (and have had one twice before). It is very much like a personal trainer that guides me back on track when "my team" and discipline aren't enough. Because let's face it, life is hard. It is good, sweet and wonderful - but still hard. Congrat's on your victory today!

I am crying. Sitting at my desk crying. The tears are not for your shadow because I know you're conquering that. The tears are for the beautiful, honest writing... and for the Lion and the Lamb. Such a precious, precious piece of writing. xo

So beautifully said and so very true. Depression is real and you are a beautiful woman. Not to mention a fabulous wife and mother. You are the conquerer!!!
Love you tons and can hardly wait to hug you and yours…

You are an amazing woman. This is all so true and real. You are the conquerer. I can hardly wait to hug you and yours!!!

It is cute and true story. I do have struggle and I try not to give up. Thank you.

I can't imagine anyone saying this more beautifully! It was written so well and deeply touched my heart. Thank you for your honesty and for sharing this most difficult subject!

Clarissa, you honor us all by allowing us into this incredible journey of yours. I know that some who suffer will take your story as a rousing to perseverance, to attempt to get help and carry on.

Until I had a good friend who suffered from depression, I did not understand, was one of those "just pull yourself up by your bootstraps" thinkers. Thank goodness I can now be compassionate and be one of those team members you mentioned.

Thank you for this beautifully-written, eye-opening piece.

Thank you so much for writing this heartfelt post. As a mother of littles myself ages 5, 3, 1 & one due in September I try not to let my shadow overtake me at times. But unlike you I do not have a large support system. I have had the pleasure (sarcasm here) of dealing with Multiple Sclerosis and dealing with depression because of my disease.
I look forward to meeting you at Writer’s of Kern…

Hello, I’m nominating you for the Versatile Blogger Award :) You don’t have to accept it if you don’t want to, just so you know I thought of you. http://jazzedaboutstuff.com/2014/04/23/kudos/