The mouth of babes

I parked the car in the crowded church parking lot, feeling like a contender for Mother of the Year. Besides, not every mother allows their kids to attend bible camps from other denominations - aren't I the epitome of tolerance?

With all three of my girls holding hands in a human chain we bounced along with four matching ponytails swaying. My middle daughter yells with overly healthy lungs, "My teacher's colored!"

I froze mid-step. What did you say?! I glanced around meeting the curious stares of the other parents.

"Ava, you can't say that," I whispered with my stroll now turning into a speed walking expedition. My youngest, at three years old, protested being the last and therefore the dragged child.

"It's black, not colored." My oldest daughter remarked - a little too loudly if you ask me.

"He's not black," my middle daughter barked. She'd now stopped, anchoring the human chain to the middle of the black asphalt. "He's colored!"

A Hispanic mother with four beautiful black haired children halted their walk. I felt my own olive complexion turn a few shades more pale with heated embarrassment. I mouthed, I'm so sorry.

A blue-eyed man with blonde hair walked by, waving at my frustrated daughter. He pulled a yarn from his neck, revealing a name tag, Mr. White.

"I told you he's colored!" said my exasperated child.
Posted by Clarissa Kae at 2:29 PM

Within the walls of my home, I'm no novelty. My husband runs his age on his birthday - meaning he just ran 35 miles in six hours on a foggy December day.

I love the vulnerability. That feeling of my own humanity, as my feet pound the pavement and my heart thumps in rebellious rhythm.

Mile after mile. Day after day.

It's not unlike writing. No outside force can move your fingers and unravel a novel. No one else can mark each footfall for that marathon.

Both writing and running require blind stupidity a stubborn will. They beg the question - Why are you doing this?

Is it tempting to curl into the fetal position at mile 22? Every. Single. Time.
Do I want to pour scalding water on my computer after my millionth revision? Every. Damn. Time.

Because I am who I am. A writer. A runner. A mother.

I'm going to run for those who are not yet strong. I am going to show my children that strong is persisting despite the overwhelming temptation to stop.

That strong is answering the question, Why am I doing this?

Because I am Clarissa Kae. I am a writer. A runner. A mother. 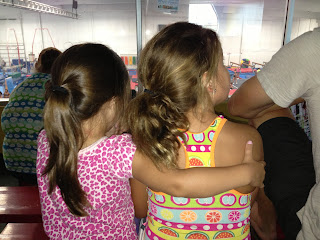 I have three daughters. Excuse me, I have three very strong willed and passionately argumentative children. But every once in awhile, the armor is laid to rest and an arm of love is extended.
I love these precious moments, made all the more tender when done without prompt or outside influence.
Posted by Clarissa Kae at 2:23 PM

First in the Back

The ideas that escape my middle daughter's dimpled mouth is cause for both concern and juvenile delight. She was born without a filter - or the desire to censor her words.

Secretly, I admire her brave candor.

She awoke before her sisters on a bright Spring day and announced that she would win her event in the school's Track Meet.

I froze, letting the pancakes turn a shade too dark. She can't take more than three consecutive steps before falling, tripping, or spilling into or onto something. The other girls filed into the kitchen, followed by their father. When my daughter repeated her prediction, Damon caught my eye, What do we say?

I offered, Even if you don't win, you're a winner in my book.

My middle daughter rolled her eyes, What does that mean?

My oldest, It means you're not going to win but don't cry when you lose.

The girls marched themselves to school (across the street, literally) before I could recover from their conversation.
A few hours later with my youngest daughter hitched on my hip, I watched my middle daughter line up to race. She winked and offered a thumbs up

Mr. Duke (who I found out later was told repeatedly by my daughter that she was going to win this event) the principal, sounded the horn. Four of the five kids take off running in a wild cloud of dust and scraggly hair.

My child, the fifth runner, adjusts her shorts for half a second and then begins her awkward jog on skinny legs. She waves and giggles while passing me - dead last.

I held my breath and clutched my youngest daughter knowing the inevitable realization of defeat. Mr. Duke went to shake her hand. She wiped her forehead and shouted, I was FIRST in the back!
Posted by Clarissa Kae at 10:17 AM

Deep in the winter of 1981, melanoma threatened to steal my father's pregnant wife and my older brother's mother. After a difficult surgery, followed by an even more painful delivery - we both survived.

Weeks and months of skin grafts and other surgeries weren't enough to dampen my mother's spirit. Including the procedure that shattered her dreams of a dozen children.

Instead of despair, she planned.

When I was nine years old, she began to see the fruit of her dream. She and my father fostered several children (nine, to be exact) and eventually adopted four. She also threw herself into her special education teaching and touched more children than she'll ever realize.

I wish I could say I stood by her and cheered her on. But when I turned ten, I began to cry in silence. The emotional toll of living with the unloved began to chip away at the tenderness within me.

She announced on a Friday afternoon that tomorrow I was going to have the perfect day. My mother, who dedicated herself to her six children, volunteered at church, taught at school and helped my father's jewelry business stopped the world for me.

She drove the three hours to Santa Monica Beach. I stood with my feet in the sun warmed sand and felt the pull and push rhythm of the tide against my shins. For hours, my skin prickled from the alternating hot of the sun and cool of the water. When we finally packed up to leave I noticed I had worn my shorts backwards. Mom smiled, saying she noticed but didn't want to ruin my perfect day. 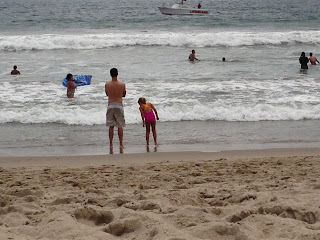 My oldest daughter silently suffered from severe bullying this past year. She is an easy target, as she is submissive, and obedient. It doesn't help that she loves academic achievements. The second grade goal for reading points (for the entire year) was 50. She snagged 127, possibly setting a new record (the school is checking).

Her aunt suggested we take her to Disneyland in the wake of this great accomplishment. My daughter quietly confided in my mother that she wanted a weekend with just her father and mother instead of a loud amusement park.

My mother said she needed a perfect day.

She took the other girls while my husband and I drove my daughter to Santa Monica Beach. For over twenty-four hours the three of us were inseparable, she even slept in our room on the floor. She chose where we ate, where we walked, what we did the entire time. She smiled and laughed with every inch of her tan little body during her perfect day.

Santa Monica didn't give us the perfect day, the time together did. Damon works for Synthes and is in nearly every traumatic surgery (his colleagues were those working around the clock during the Boston Marathon bomb). Because accidents are spontaneous, he is on call twenty-four hours of absolutely every day.

Saturday, his partner braved the county as a lone ranger allowing Damon some time with his family. We were together, alone.

It was the perfect day.