After I wiped my sweat saturated brow and stretched my clenched fingers with National Novel Writing Month (NaNoWriMo) in 2011, I had the pleasure of consulting with The Book Doctors. The fantastic husband and wife duo are the authors of The Essential Guide to Getting Your Book Published - the equivalent to What to Expect When You're Expecting for writers (and let's be honest, is there really any difference between pregnancy or novel writing?). They championed my romance when I participated in their Pitchapalooza events (via Chris Baty's NaNoWriMo's online version) and during a very helpful consultation with Arielle.

Now that I'm done preaching their virtues on this online soap box ... I've come to share their newest gift. A free 20 minute consultation (you can pitch your book, ask marketing questions, or whatever tickles your writing fancy).

Mention this blog post, snag a book (they're a few bucks off Amazon) and follow them on either their website The Book Doctors (go ahead and click on the link/name) or on their Facebook page (under, you guessed it The Book Doctors).

Email what you just did to david@thebookdoctors.com (yes, the link is live) and bam (Can't cook like Emeril but I'm pretty fantastic at yelling "bam!"), you now have a free consultation with the good doctors.

Any questions? Send a smoke signal (email) my way!

The Beauty of a Book

I'm sitting in Barnes and Noble, the house was an all too tempting mistress - just one more dish, only one more load of laundry - and so I am here. Sitting with tattooed students and grey haired beer bellied men while we type, study or read to our heart's content.
But as I look around I'm captivated by one particular lady. She munches on her cream cheese layered bagel and sips from her steaming coffee cup; all without taking her eyes off the pages of a thick book. Her lips curl into a mischievous grin. Another moment her fingers clench in frustration.
She's not here. She's disappeared from this forgotten town in California. Her world is wrapped neatly into four hundred pages of some author's reality.
She begins flipping through pages faster, her eyes flitting at an ever increasing pace. Only after two hours does she close the book and stare out the window and reinvent her version of the book in her mind.
Thank you my Fellow Devourer of Books, you've reminded me of why I'm editing a book for the umpteenth time. Is it too much to hope that one day I will witness someone happily experiencing the romance of Rhett and Isla Belle?
Perhaps, but it's one I'm willing to type my way toward.
Posted by Clarissa Kae at 11:33 AM 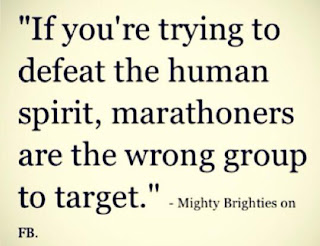 I am a runner. I am a marathoner. And I am angry.
I am sad.
When I run a marathon, by myself or with friends and family, my will defies the fatigue and logic. For 26.2 miles I don't just endure, I fight. I run.
I win.
And then I turn around and cheer my fellow fighters.
We cry. We laugh.

The Boston bombs were placed where the most amount of high fives, hugs and cheer-leading would be taking place. The finishers and spectators alike were yelling, supporting the runners.

The timing was after 17,000 of the runners would have finished, allowing them to join with their supporters - and worse, during the expected finishing time of charity runners. They run for those who can't run for themselves

I was asked if the bomb would change my running "hobby."
Yes. I will run farther. I will run faster. I will never stop.
It's not a hobby. It's a lifestyle.
I am a marathoner - we are a special breed. I will be doing anything and everything to support the victims of the Boston attack.
Why? Because it's true.
We were the wrong group to target, our will does not break.

Posted by Clarissa Kae at 5:32 PM No comments:

Who is that fantastic lady next to me? Oh, just a new friend of mine, the author of The Shoemaker's Wife, Adriana Trigiani. 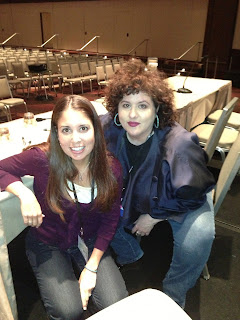 No big deal. Right? Huge, gigantic deal! She all but fist pumped me into publication with her enthusiasm for all things written. She's the proverbial cheerleader and I'm profoundly touched by her sincerity. 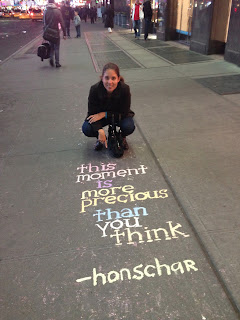 This quote couldn't have been more telling....I flew to New York for one purpose, and one purpose only. To pitch my book to literary agents. 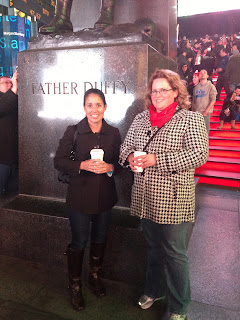 Thanks to Willow Moore, who is embarking on her own editing venture, I had a partner in crime in the Big Apple. 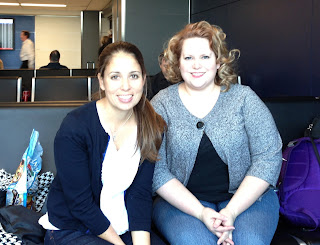 I was expecting negative criticism and feedback but was floored when I received more cards and encouragement - from every single agent I spoke with. Every.Single.One.
New York, I love you!
Posted by Clarissa Kae at 10:43 AM